Adding some cells or a column is some of the most common things users do in Google Sheets.

If you have a column full of numbers, you can easily calculate the sum of the entire column (or a specific range in the column).

Follow along with this Google Sheets sum of column guide to master this function.

The syntax for the SUM formula in Google Sheets goes as follows:

To SUM a single range of cells you could use a formula such as this:

To SUM multiple ranges, here’s an example of how to add up a column in Google Sheets with another range:

To SUM single values, you can put individual cells as the value arguments, like so:

You could also use a combination of single-cell values and ranges, here’s how to add up numbers in Google Sheets from multiple ranges.

Step 1: Select an empty cell to perform the calculation in

Step 3: Click and drag over the cells you wish to sum, or type the range manually

Suppose you have the dataset as shown below and you want to get the sum of all the values in the column. 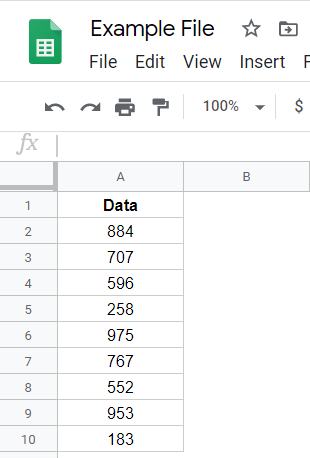 Below is the Google Sheets sum column formula that will give you the sum of all the values: 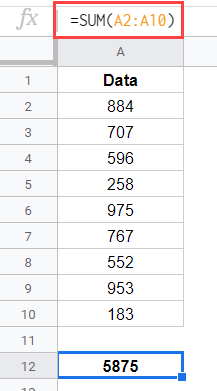 Enter this formula in cell A15 (or whichever cell where you want the sum of the column) and hit the enter key.

Google Sheets try to guess the range for you which you want to calculate the sum. When you enter the text =sum and then hit the tab key, Google Sheets will automatically select the range of cells that have the numbers.

Since this is a dynamic result, in case you change anything in any of the cells, the formula would automatically update.

While this works great, what if your data expands and you get new values that you need to be a part of the sum. While you can adjust the formula, there is a better way to make the formula dynamic.

Instead of just using the range that has the values, you include more cells that might get some additional data in the future.

In our SUM Google Sheets example, I can use the below formula instead:

Although cell A11 to A14 are empty as of now, these are still used in the formula. In case a value is added to these cells, the formula would automatically update to reflect these new values in the total sum.

Another thing you can do when calculating the sum of all the values in a column is to include the entire column as a part of the formula.

For example, suppose you have the data as shown below and you want to add all the values in the entire column. At the same time, you want to make sure that in case any new value is added anywhere in the column, it’s also added to the total value.

Below is the adding columns in Google Sheets formula that will do this: 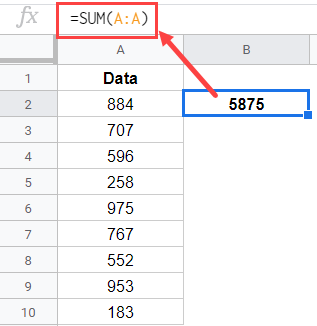 The above formula takes A:A as the input range, which represents the entire column.

Also, don’t worry about having any text value in the column, as text values are automatically ignored.

Remember that the SUM formula only adds those cells that have a numeric value. If there is any text, or of the number that has been formatted as text, it would be ignored.

I hope you found this tutorial useful!

How to SUM a Row In Google Sheets

You can use the above method for rows too. You just have to use the cell references for the row instead of the column, like so:

As you can see it works exactly the same as columns with cell references. It works the same if you want to SUM the entire row too. You must make sure the cell performing the calculation is not in the same cell to avoid a #REF! error.

Using the Function Button Instead of Typing Formulas

You can use the functions button instead of typing the SUM function. Here’s how:

How to Use the SUM Function in Google Sheets Mobile

You can use the SUM function in exactly the same way as you do on the desktop version. Here’s how to total a column in Google Sheets Mobile:

How Do I SUM a Column in Google Sheets?

Here’s how to sum cells in Google Sheets:

How Do You SUM an Entire Column?

To sum an entire column you just have to use the column name as the value argument for the SUM function. For example, to sum the column C you could use this formula:

How Do I SUM a Row in Google Sheets?

Summing a row works exactly the same as columns, here’s how to sum in Google Sheets using rows as an example:

How Do You SUM Multiple Columns in Google Sheets?

You can add as many columns or ranges as arguments to the SUM formulas as values as you’d like. You just have to separate them with a comma. Let’s pretend you want to SUM the values of the entire A and B columns and rows 3-5 in column C, you formula would look like this:

The SUM function is one of the simplest formulas to use in Google Sheets once you get the hang of it. And, when you’ve had enough Google Sheets sum of column practice, you’ll feel more comfortable tackling difficult formulas. There’s still plenty more to learn about spreadsheets. Check out some of the below guides to increase your knowledge.