Google Sheets is now the go-to spreadsheet tool for most people. It’s free, super easy to collaborate with, and has some pretty awesome functions and features.

Even if you want to do something as basic as data record-keeping or simple calculations such as multiplication or division, you can easily do that in Google Sheets.

In this tutorial. I will show you a couple of ways to divide numbers in Google Sheets.

You can easily divide numbers in Google Sheets using an inbuilt formula or using the divide operator (as we will see with examples).

Doing a division in Google Sheets is such a regular task that there is an in-built function that allows you to divide two numbers or numbers that are in two cells.

It’s the DIVIDE function (no marks for guessing)!

You can use the below DIVIDE formula to do this:

In the above formula, the first argument is the dividend (the number which has to be divided) and the divisor (the number with which to divide)

I have used the cell references in the above example, but you can also hard-code values into the formula. For example, you can also use the below formula:

The benefit of using cell references is that your formula result becomes dynamic. This means that in case I change the value in cell A1 or B1, the formula would automatically update.

Also, remember that the divisor can not 0. In case your divisor is 0, you will get the division error – #DIV/0!

You can use the below equation to do this:

And in case you want to quickly divide numbers (instead of cell references), you can do that as well (as shown in the below formula):

Order of Precedence when Dividing Cells

An important thing to know when using arithmetic operators (such as division or multiplication) in Google Sheets is the order of precedence.

Let me try and explain this with an example.

Suppose I use the below formula:

Can you guess what the result would be?

This happens as there is an order of precedence in Google Sheets where division is done before addition. Hence it first divides 1200 by 15 where the result is 80. It then adds 15 to this result giving you the overall result as 95.

Now, it’s not difficult to figure this out in our simple example, but this can lead to issues when working with large complex formulas.

In such cases, it’s best to not worry about the order of precedence by keeping calculations in brackets (parenthesis).

For example, in case you want to first do the addition and then the division, you can use the below formula:

In real-life scenarios, you wouldn’t want to open Google Sheets for a simple division. You can easily do that using calculator on your smartphone or with a simple Google Search.

Where you can use Google Sheets is to quickly divide numbers into columns and get the result for hundreds of cells in a second.

For example, suppose you have the dataset as shown below and you want to calculate the division when the value in column A is divided by the corresponding cell in column B 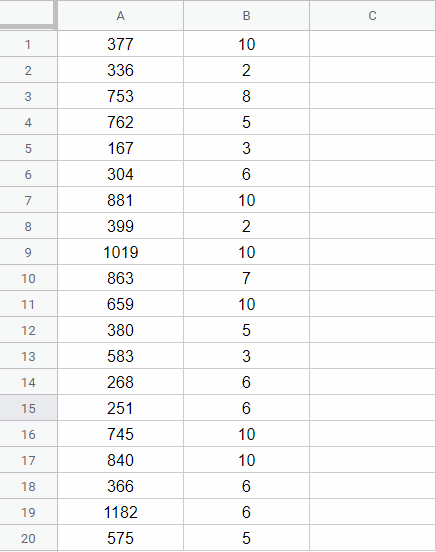 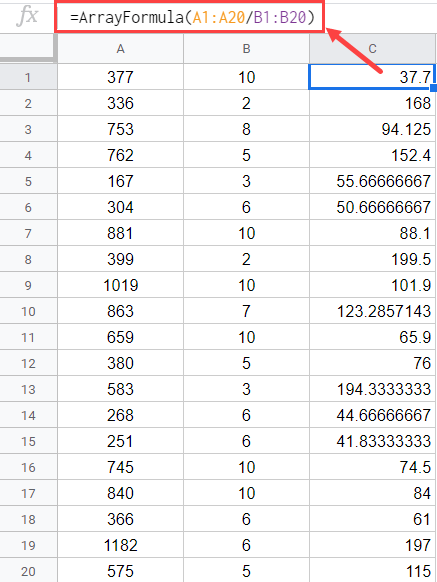 Since this is an array formula, you only need to enter this formula in cell C1 only and it will give you the result as shown above.

Also, you can not delete or edit a part of the array. You can, however, delete the entire array by deleting the content in cell C1.

Divide without Remainder in Google Sheets

Let’s say you have the dataset as shown below and you want to divide the value in column A with that of in column B.

If you do it as shown in the previous section, you would get the integer part as well as the decimal part.

In case you don’t want any remainder when these values are divided (where the remainder is the decimal part), you can use the below formula: 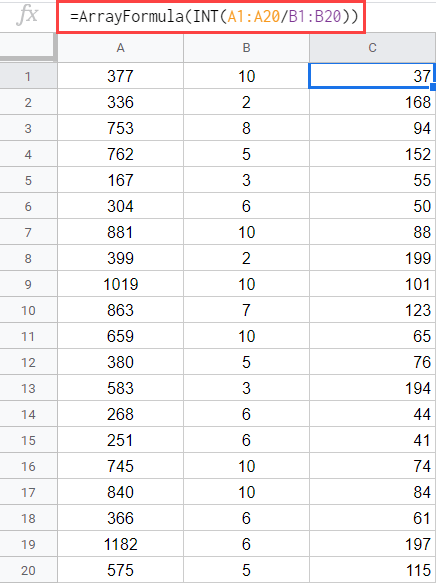 The above formula uses the same division formula but wraps it within an INT function, which will only return the integer part of the result and not the decimal part.

So these are some of the ways you can divide in Google Sheets. Based on whether you want to divide numbers, cells, or columns, you can choose to use the DIVIDE function or the divide operator.

I hope you found this Google Sheets tutorial useful!