There are some times I wish Google Sheets had some more functionalities like MS Excel.

One such functionality that isn’t available in Google Sheets is the ability to filter by color.

For example, suppose I have a dataset as shown below and I want to filter all the rows where the record has been colored in a specific color.

Unfortunately, there is no direct way to filter by color in Google Sheets.

But there are a few indirect ways

In this tutorial, I will show you a couple of methods you can use to filter rows based on the color as the criteria in Google Sheets.

Suppose you have a dataset as shown below and you want to filter all the rows where the cells have been colored. 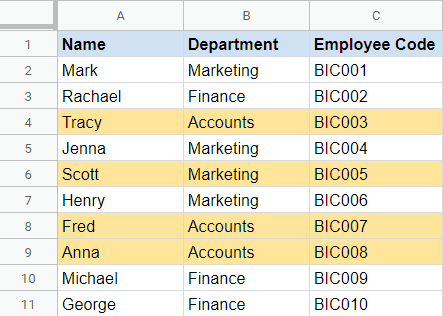 For Google Sheets to filter a dataset, it needs to be able to use criteria in the cells. By using this criterion, it filters all the records that match the criteria.

And since the color is not a value by itself, we can not filter based on it by default.

By using a Google Apps Script, you can convert the color into a HEX code (which is a code assigned to each color).

Once you have the HEX code, you can now filter the data based on it.

Below is the script that will create a function in your Google Sheets document that you can use to get the HEX code of the color that has been applied to the cells.

The above function takes the range as input and returns the background color hex code of the input cell/range.

Once you have added this code to the Google Apps Script Editor, you will be able to use the function ‘GetCellColorCode’ to get the HEX code of the cell color in a separate cell.

How to add the code to the Google Script Editor is covered later in this section.

Let me first show you how this formula works.

Enter the following formula in the adjacent column of the dataset 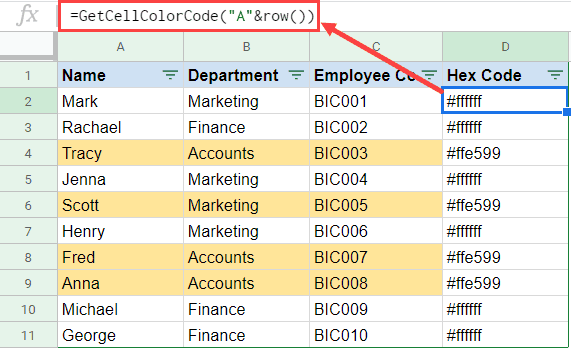 The above formula uses the function we created (GetCellColorCode) and inputs the range such as A2 or A3 or A4 – depending on the cell.

Since I didn’t want this to be manual, I have used “A”&ROW() – which returns the cell address based on the row in which the formula is used. In row 2, this would return A2, in row 3, it would return A3, and so on.

Once you enter this formula for all the records, you will get a result as shown below:

Now that you have the hex codes in a separate column, you can easily filter by color by actually filtering by hex code value.

Below are the steps to filter all the rows where the color is yellow in the above dataset:

This will filter the rows based on the selected color hex code (as shown below).

A few things to know about using the custom formula created using the script:

How to Add the Script to Google Script Editor

Below are the steps to add the script to filter by color in the Google Sheets script editor:

The above steps add the code to create a function to filter by color to that specific Google Sheets document.

Now you can use the function that you have created in any of the worksheets in the Google Sheets document.

Using an Add-on to Filter By Color in Google Sheets

One great thing about Google Sheets is that it has tons of amazing add-ons available for use. All you need to do is search for one and start using it. And it hardly takes more than a few clicks.

So if you want to filter by color in Google Sheets (something which can’t be done natively by Google Sheets), you can easily get this done with a simple add-on.

The add-on that you can use is called the Sort by Color.

It doesn’t directly allow you to filter the rows, but instead, sort these. Once you have all the sorted colored rows, you can easily work on these and if you need, even filter/hide these.

Below are the steps to add this add-on in your Google Sheets document:

Once you have done all the above steps, it will add the add-on to your Google Sheets document.

Now, you can access the options to sort the data using this add-on.

Below is a video that shows how to use the Filter by Color functionality of this add-on.

Note: While this add-on is amazing, I personally find the script methods easier as it’s less complicated. The add-on, however, allows you to filter by color and then export the results in some other Google Sheets document as well. So if that’s what you want, give this add-on a try,