How to Insert BULLET POINTS in Google Sheets

In case you prefer reading over watching a video, below is a written tutorial.

Sometimes, you may want to insert bullet points in Google Sheets while you’re creating lists.

While there are a couple of ways to inserts bullet points in a cell in Google Sheets, there is no direct way to do this.

In this tutorial, I am going to show you three different ways to add a bullet point in Google Sheet.

The method you choose will depend on how you want to use the bullets in Google Sheets.

Copy & Paste Existing Bullets From Web or Other Applications

One of the easiest and straightforward ways to insert bullets in Google Sheets is to copy and paste it from a website or other applications (such as Google Doc, MS Word, PowerPoint, etc.).

For example, below are a variety of bullets that you can simply copy and paste in cells in Google Sheets.

Note that this method works only when you have a numeric keypad. In case you don’t, use any of the two methods covered later in this tutorial.

Here are the steps to use a keyboard shortcut to insert bullets in a cell in Google Sheets:

The above steps would instantly insert a bullet point where you placed the cursor.

If you want to have multiple bullet points in the same cell but in different lines, you need to insert a line break and then use this shortcut to insert the bullet points.

To get a line break, place the cursor where you want the line break and then use the keyboard shortcut ALT + Enter (hold the ALT key and then press the Enter key). This will take you to a new line in the same cell. Now you can use the shortcut to insert the bullet point (ALT + 7)

You can also use a formula to insert a bullet point in Google Sheets.

Bullet Points have a specific Unicode number that you can use in the CHAR formula to get a bullet point as the result.

The following formula will give you a bullet point as a result:

The benefit of using a formula is that you can combine it with other text or formulas.

For example, suppose you have a list of grocery items and shown below and you want to convert it into a bulleted list. 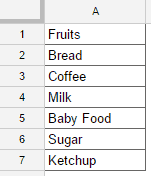 While you can do this manually, using the CHAR formula will be the more efficient way in this example.

The below formula will give you the same list with a bullet point before each item.

The above formula simple takes the cell reference of the cell that has the item and adds the bullet point (using the CHAR function) and a space character.

The final result is shown below: 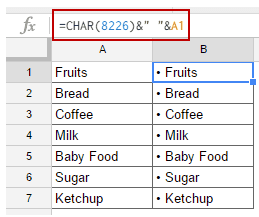 One of the benefits of using a formula is that it makes the results dynamic. This means that if I change any of the grocery items in column A, the values in columns B would automatically update, while still giving me the bulleted list.

The drawback of this method is that you need to use an additional column to get the list.

In case you don’t want to keep the formula and want to get static list items with bullets, copy the resulting data in column B and paste it as value.

Here is a detailed guide on how to convert formulas to values in Google Sheets.

Create a Custom Format to Add Bullet Point at the beginning

Google Sheets allow you to create custom formats where you can change the way your text looks within a cell.

You can also create a format where a bullet point is added to the beginning of the text in each cell where this format is applied.

Note that this technique only changes the way the text appears in the cell, but it does not change the text itself.

Below is an example where I have created a custom format with bullet points at the beginning of the cell content. Note that the value/text in the cell remains unchanged (and doesn’t include the bullet). 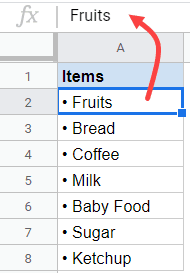 One of the benefits of using this technique is that you only need to apply the format to cells once and then as soon as you add any text to the cell, Google Sheets will automatically add the bullet point (as shown below).

Below are the steps to create a custom format that shows the bullet point:

The above steps change the format of the cells so that by default these cells show a bullet point before the text. The @ here represents any text that you enter in the cell.

You can use the same technique to apply any other type of bullet as well – such as a checkmark (tick symbol) or an arrow.

You may also like the following Google Sheets articles: