How to Calculate Days Between Two Dates in Google Sheets

Working with date and time has become easy in Google Sheets thanks to some formulas.

You can easily calculate the number of days between two dates in Google Sheets by simply subtracting the dates (in case you need all the days), or using formulas to find out working days or non-working days.

In this tutorial, I will cover various scenarios where you can calculate days between two dates in Google Sheets

One thing you should know about dates is that these are just numbers that have been formatted to look like dates. Since these are numbers, you can perform operations such as addition and subtraction with dates.

Suppose you have the start date and the end date of a project (as shown below) and you want to quickly know the total number of days between these two dates.

Since dates are nothing but numbers, you can easily get this by subtraction the start date from the end date.

The below formula will give you the total number of days between these two dates.

The above formula tells us that there are 274 days between the project start and end date.

To get the number of days that include project start and end date both, use the below formula:

While it’s nice and easy to get the total number of days between two dates, in most cases, you just don’t need the total days but the workdays.

And in case, I am assuming working days to be Monday to Friday. In case the working days are different, you will need to change the formula (covered later in this tutorial).

After all, if it’s a project, you can’t expect your team to be working on weekends.. right!

Calculating the number of working days between two dates is not as straightforward as subtracting the values, but it’s not too hard (as Google Sheets has a formula for it).

The below formula will give you the number of working days between these two dates:

The NETWORKDAYS function (as the name suggests), gives you the networking days in between two dates (it takes start date and end date as the input arguments)

There are two things you need to know about the NETWORKDAYS function:

While this may work well in most of the cases, there are two common scenarios where you may want to tweak this formula:

The good news is, Google Sheets can handle all this easily.

For this to work, you need to have a list of holidays that you want to exclude.

In most companies, they provide a holiday calendar that you can use. Or if you’re a freelancer or small business, you can create this yourself too.

Below is an example of a holiday calendar that I have for 2020. 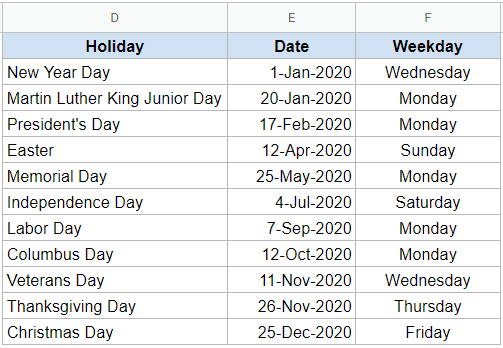 Now when I am calculating the number of working days between two dates in Google Sheets, I don’t want to count the days that are holidays.

Thankfully, NETWORKDAYS function already has this feature built in. You can specify the range that has the holidays and it will automatically ignore these while calculating the workdays.

Suppose you have a dataset as shown below:

The below formula will give you the number of working days between the start and end date while not counting the holidays:

Note that NETWORKDAYS function is smart enough to adjust the holidays and weekends by itself. For example, in the below holiday dates, there are eight holidays between 1st April and 30th December.

But NETWORKDAYS function only considers six of these and two are on weekend days anyway (Easter and Independence Day). Since the NETWORKDAYS formula anyway disregard weekend days when doing the calculation, it will also make sure it doesn’t remove the days twice (when it’s a weekend as well as a holiday)

Calculate Workdays When Weekends are Not Sat and Sun

While NETWORKDAYS function automatically assumes weekend days to be Sat and Sun, this may not be the case for all.

Some of you may only have a Sunday off and some may work in countries where Friday and Saturday are off and Sunday is working.

To adjust these variations, there is another function in Google Sheets that you can use.

NETWORKDAYS.INTL – where INTL stands for international.

When you use the NETWORKDAYS.INTL function, apart from the start date, end date and the holidays, it also allows you to specify the weekend, where the weekend could be any one day of the week or any two consecutive days of the week,

So let’s say you have the below example and you want to calculate the number of working days when the weekend days are Friday and Saturday.

The below formula will give you the result:

The above formula would return 191, which is the number of days between start and end dates, with Friday and Saturday as weekend days.

Why did I use 7 to make Friday and Saturday as Weekend Day?

This is how this formula has been coded. There are these numbers that specify weekend days and are pre-coded in the formula.

So when I use 7, it knows that I want the weekend days to be Friday and Saturday.

Below is a table that shows all the numbers you can use and what they mean:

Based on the above table, if you only want Sunday to be considered as the weekend (with a six-day working week), you need to use 11 as the third arguments in the NETWORKDAYS.INTL function.

Suppose you are in a job where you only work on specific days of the week (let’s say Monday, Tuesday and Thursday).

With such an arrangement, it becomes even more difficult to count the number of working days between two given dates.

Thankfully, when the NETWORKDAYS.INTL function was being formulated, this was also taken into account.

When you’re using the NETWORKDAYS.INTL function for something such as this, you need to clearly specify which days are working and which are not.

And you do that by using a series of seven consecutive numbers (where each number is either 1 or 0). These numbers represent the seven days of a week. The first number of the series represents a Monday, second represents a Tuesday and so on.

Now, you can create any combination of a week with a mix of working and non-working days. And these don’t have to be consecutive.

So in our example, where Monday, Tuesday and Thursday are working days, the code would be 0010111

And you can use this code in the NETWORKDAYS.INTL function as shown below:

Note that the third argument is the string of numbers that represent working and non-working days. This needs to be within the double quotes

The last argument in this formula specifies the range that has the holiday dates.

Sometimes, you may not need to calculate the working days but the number of one specific weekday.

For example, suppose you want to calculate the number of Mondays that fall in a given date range (while also accounting for holidays).

A practical use of this could be when you want to know how many update calls will be done during the given dates if the call happens on Mondays.

Suppose you have the data set below where you want to find the number of Monday in between the start and end date:

To calculate the number of Mondays, I will be using the NETWORKDAYS.INTL function with the string on seven consecutive numbers that represent the days in the week.

This is nothing but a variation of the example where we calculate non-consecutive working days. In this example, we need to specify only Monday as the working day and rest all are the weekend days.

The below formula would give you the number of working Mondays between the start and end date (while also accounting for the holidays):

If you get a hang of how to use NETWORKDAYS and NETWORKDAYS.INTL functions in Google Sheets, you can easily manage situations where you have to calculate workdays between two days.

This is among the easiest ways to calculate the days between dates in Google Sheets, so long as you aren’t worried about excluding, weekends, holidays, etcetera.

To use the DAYS function, you just have to use this simple syntax:

With this syntax, you can either type the dates manually or use cell references to populate the formula.

To use the DAYS function, simply:

If you’re typing the dates manually, don’t forget to use quotation marks (“”) around the dates too

In the above examples you can see that in cell C2 we typed the dates manually and C3 we used cell references and still got the same result.

The DATEDIF function works similarly to the DAYS function. The main differences are that you must also provide a “Unit” for the syntax and you use the start_date first instead of the end_date. So, the syntax goes as follows:

Let’s use the same data from the DAYS example:

As you can see, we had to put the older date first in this formula because you must enter the start_date first for the DATEDIF function.

We also have “D” written into our formula as our unit, this tells Google Sheets we want the results in days.

The DATEDIF function could also use the following shortcuts to show the results in different units.

If you’re working in finance, you may need to calculate days between dates for 12x 30 day periods. To do this, you can use the DAYS360 function in Google Sheets.

The syntax for this method goes as follows:

With this function, you won’t have to enter the [method] if you’re working with the US version of a 360-day calendar. If you use the European method, you have to add TRUE ie:

For our example, let’s use the US version.

Unfortunately, to juxtapose the DAYS function. DAYS360 uses the start_date first so make sure the oldest date is used first in your formula. Other than that you can use the same steps as described above in DAYS to get the result you’re after.

As you can see in the example, the results read 360 so the extra 5 days of a regular calendar year are now omitted from the results.

But, for the purposes of working with dates you can imagine it more like:

Let’s take another look at the same data set to show how the minus function works for calculating the difference between dates. You can follow the exact same steps as the DAYS function but just type =MINUS instead.

As you can see, you get the same results. We would still recommend using the DAYS function though, as you get reminded of the order to enter the dates from the cues in Google Sheets. Plus it makes your spreadsheet portable to Microsoft Excel.

Hope you found this tutorial useful.