The record macro Google Sheets functionality is quite powerful. They automate your repetitive tasks so you can get to the meat of your spreadsheet work much more efficiently.

Setting up macros in the first place can be a little daunting, but never fear. In this tutorial, I will cover all you need to know about recording and using macros in Google Sheets, as well as some Google Sheets macros examples where this can be useful.

Before we dive into how to create a macro in Google Sheets, let’s learn a little more about what a macro is.

What is ‘Macro’ in Google Sheets?

A macro is a piece is of code in the backend of Google Sheets (don’t worry, it isn’t complicated at all).

This macro (a piece of code) is a series of steps that you have defined, and as soon as you use Google Sheets to run this macro, it will automatically follow all these steps.

To give you an example, suppose you get a dataset where you have to do three things:

Now you can do all these three things in Google Sheets manually (one step at a time).

But what if you have to do this over and over again every day or multiple times every day. In that case, you can quickly record a macro and automate these steps. So the next time you have a dataset, all you have to do is run the macro, and it will do these steps.

Don’t worry! You don’t need to know any coding to do this. When you record a macro, you simply show Google Sheets the steps that need to be done (by doing it once). Google Sheets automatically creates a code for you and uses it later when you run the macro.

So let’s get started and record our first macro.

How to Create a Macro in Google Sheets

Creating macros in Google Sheets can be simple, lets take a look a look at the steps involved:

Here are the steps to record this macro in Google Sheets:

The above steps start the macro recording. From this point onwards (until you stop the macro recorder), Google Sheets is going to keep a track of what all you do in it and convert your steps into a code in the backend.

Now since Google Sheets is recording every step of our work, let’s do the three things that we want to automate:

Once you have done these three things, click on the Save option in the Macro dialog box.

This will open the Save New Macro dialog box, where you need to specify the name of the macro. It’s advisable to keep it short yet descriptive enough so that you know what this macro does. In this example, I will name this ‘Color Hello cell’

You also have an option to specify the shortcut for this macro. When you set a shortcut, you can use this keyboard shortcut to run the macro. Google Sheets allow you to have a shortcut in the following format – Control + Alt + Shift + Number (where the number can be between 0 and 9) 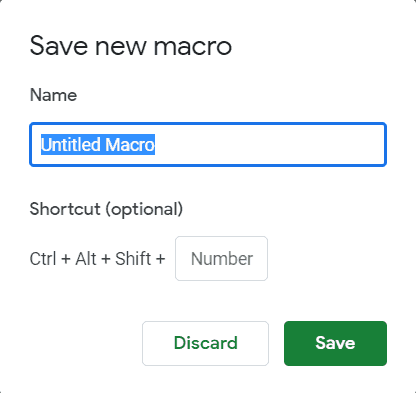 Once it’s done saving the macro, you will see a notification in the bottom left of the Google Sheets document. It also shows the Edit Script option, and if you click on it, if you follows all the steps of how to create a macro in Google spreadsheets, it will open the Google Apps Script editor and show you the code it has recorded.

Running the Macro in Google Sheets

Once you have recorded the macro, you can run it whenever you want and it will follow the steps you showed it while recording the macro.

There are a number of ways you can run a macro in Google Sheets:

Once you have recorded a macro, you can easily run it by locating it in the Tools tab.

Click on the Tools tab and hover your cursor over the Macros option. 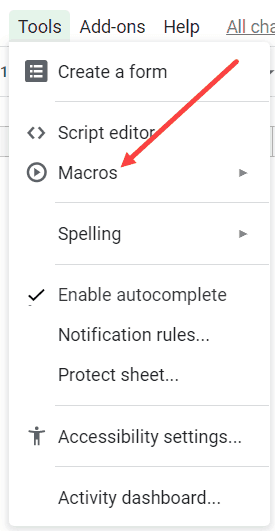 In the additional options that appear, you would see all the macros listed at the bottom (after the first three options). 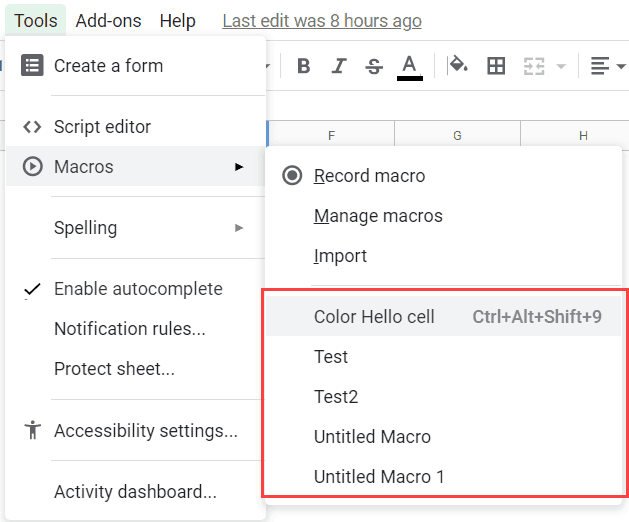 As soon as you click on any of the Macro names, it will be executed immediately.

Google Sheets is not as fast as other spreadsheet tools (such as Excel). So when you click on any of the macro names, it may take a few seconds to get it done. It also depends on the Google Sheet automation you’re trying to achieve with the macro. If there are many steps to it, it may take more than a few seconds.

Once the keyboard has been set, you can simply use the shortcut and Google Sheets will instantly run the macro.

Again, it may take a few seconds depending on how many steps are there in the macro.

When you record a macro in Google Sheets and save it, the steps are automatically saved in the Google Apps Script Editor.

Now if you want to execute a macro, you can also do this from the GAS editor.

To do this, you first need to open the GAS editor (by clicking on the Tools tab and then on Script Editor). 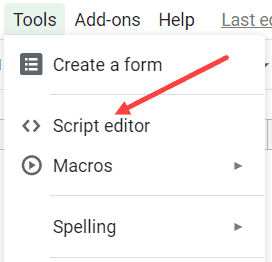 When the script editor opens, select the macro that you want to run (from the Select function drop-down) and click on the play button in the toolbar.

By Assigning the Macro to a Shape

You can also insert a shape in the worksheet and then assign your macro to that button. 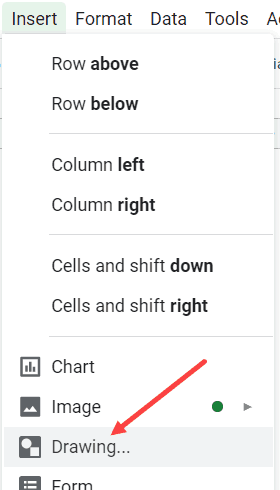 This will open the Drawing dialog box.

Click on the Shapes icon in the dialog box and insert the shape you want to use as a button to run the macro.

When you click on any shape, you will need to draw it in the area provided. Once you draw it and click on Save and Close, the shape will be inserted in the worksheet.

To assign a macro to this shape, select the shape and click on the three dots that appear at the top-right.

From the options that appear, click on ‘Assign script’. 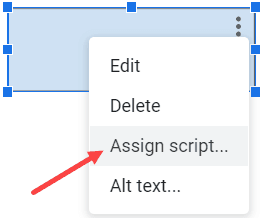 The above steps will open the Assign Script dialog box, where you need to enter the name of the script that you want to run. Unfortunately, at the time of writing this tutorial, there was no way to get a list of all the names of macros right in this dialog box. You need to know the exact name and enter it here.

Now, whenever you will click on the shape, it will instantly run the macro.

When you use a cell reference in Google Sheets, it can be absolute or relative.

Absolute cell references mean that if you copy and paste these in formulas, these references will not change. These are absolute. For example, let’s say you have some values in cell A1:A10 and have the formula =SUM($A$1:$A$10) in cell B1.

This formula uses the absolute cell references. This means that if I copy and paste this formula from cell B1 to B2 (or any other cell in the worksheet), it will not change the cells it refers to.

On the contrary, let’s say I have the following formula in cell B1:  =SUM(A1:A10). Since this uses relative cell references, when I copy and paste the formula from cell B1 to B2, the formula would change to =SUM(A2:A11).

This happens as using the relative cell reference does not lock the cell references and is relative to the position where it’s used. If I copy this formula to cell C1, it would change to  =SUM(B1:B10). This is because I shifted the formula one column to the right (from B to C), the reference in the formula also shifted by one column.

Now coming to macros in Google Sheets, you can record a macro with Absolute or Relative cell references. This option appears as soon as you start recording the macro.

When you record a macro with absolute cell referencing, it will remember the cells or ranges you have selected and use the same cells when you run the macro. For example, if you record a macro to enter the text ‘Hello’ in cell A1, when you run this macro again, it will always go back to cell A1 and enter the text ‘Hello’ in it.

But with relative cell references, it remembers the position where you started and then moves relative to this position. For example, if I start recording the macro when I have cell B1 selected and I first select A1 and then enter the text ‘Hello’ in it, Google Sheet’s macro will remember that I moved one cell to the left.

So the next time you run this macro and have cell K1 selected, it will enter the text in cell J1 (which is one cell left to the selected cell).

Advantages of Using a Macro Recorder

Here are the advantages of using a Macro Recorded:

What a Macro Cannot Do in Google Sheets

While macros are amazing, these have some limitations:

How to Edit and Remove Google Sheet Macros

You can edit and remove macros by following these simple steps:

How to Schedule a Macro

Sometimes you may want to set up a macro to only run at certain times or in reaction to triggers. You can do this using Google Scripts by following these steps:

Here are a few tips to get the most out of your macros:

No, they aren’t but you can easily import a macro into a new sheet.

What Is Recording a Macro in Sheets?

Recording a macro is recording a set of tasks that you have to repeat often so that you don’t have to manually do them every time. The spreadsheet will do it automatically with one click.

Now that you know how to record macro Google Sheets has plenty of other Google Sheets automation in the form of scripts. So, learning more about Google Scripts should be the next step to becoming a master of Google spreadsheets. 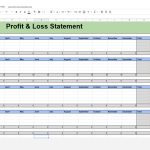 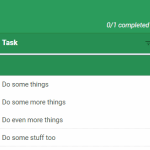 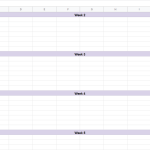 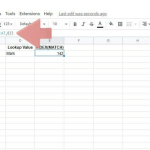